Remotely monitor soil moisture of your off-site garden plot. Data is plotted in a cloud service so you know when to go and water!

Remotely monitor soil moisture of your off-site garden plot. Data is plotted in a cloud service so you know when to go and water! 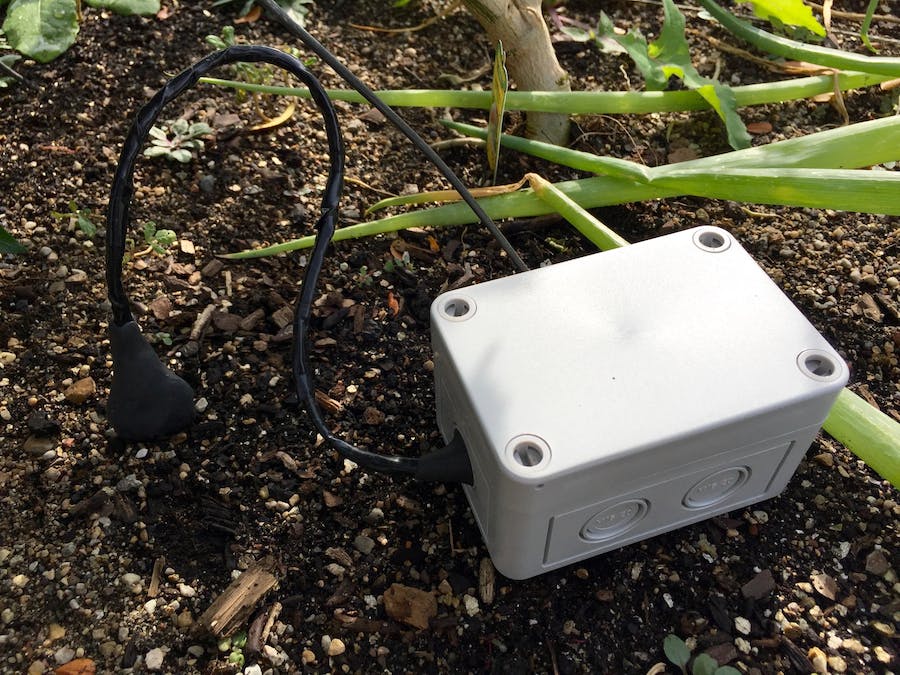 I grow vegetables in a community garden two miles from my house, so when I was given the opportunity to test a cellular data system for makers and hackers, my first thought was to use it for the garden to monitor soil moisture. Sometimes I’m not able to get out there for several days at a time, so some sort of warning that the garden needed water would be really helpful. Since the garden has no power or internet available, a self-contained device with its own internet connection is just the ticket!

Hologram.io provides a cellular data service that works with any device that accepts a SIM card, but they also have a programmable board called the Dash with some great features for this project: small, built-in Li-Ion battery compatibility and charging, built-in cellular modem, and programs right in the Arduino IDE. This allowed me to build the project with minimum size and number of pieces.

Besides an off-site garden, this system would be great for orchards, greenhouses, or just regular plants on large properties.

This project from a very high level:

To get started, I registered my new SIM card on the Hologram dashboard and followed their tutorial to get the Dash board up and running. As part of the process I could see debug commands from the modem which included messages about which cell carrier it was connecting to—sometimes it was AT&T, and sometimes T-Mobile, so it was good to know that the Hologram system had the flexibility to get me the best signal available. It’s also convenient that the service cost to keep a SIM card active is so low and it can be paused at any time.

The code was fairly simple:

The snooze and deepSleep functions are unique to the Dash for saving power, part of the Dash class. Snooze is like a low-power version of the standard Arduino delay , and deepSleep is a very low power mode that is only woken up by a timer (like I used) or with a hardware interrupt.

It’s also worth noting a trick I used for the moisture sensor to avoid corrosion. If the power to the sensor were applied continuously and there was always current flowing between the two electrodes through the dirt, eventually the electrodes would corrode. By only powering the sensor while taking the measurement, we can dramatically extend its life. This is accomplished by hooking up the Vcc of the sensor to a digital output pin on the Dash. By turning that pin HI, it powers the sensor, the signal can be read, and then the digital power pin can go back LO. This way, the sensor is only powered 0.1 seconds out of every hour, which also saves battery life.

That takes care of reading the sensor and sending the data to the Hologram cloud. Once it’s there, it needs to be processed in some useful way. A free cloud service that can help with this is called Losant, and to set it up for a relatively "simple" project like this I followed the instructions from this "Unicorn Finder" tutorial which included sending GPS data from a Hologram SIM card to the Losant cloud via the Hologram cloud.

That tutorial will show you the actual tactics to implement the system in Losant, but here I’ll explain the strategy of how it all works to get some fundamental understanding:

Notes on debugging the cloud communication:

To build the finished product, I wanted it to be waterproof, battery operated, and unobtrusive. Finding a sealed project box was easy enough, but how would I incorporate the soil moisture sensor which was little more than a bare PCB? I considered having the sensor live inside the project box with the legs sticking out, but didn’t like the idea of the box flopping over or covering the soil that I was trying to measure the moisture of.

I decided to make the sensor separate and attached via an umbilical (really just the three wires). Potting the entire sensor board in Sugru protects it from damage and the elements, and also allows the feedthrough into the project box to be sealed. Electrical tape can protect the sensor wires.

1 / 6 • Connection wires through the project box, ready to be sealed

I followed these steps for the hardware construction:

I tested the sensor by having it output the moisture content signal to the serial monitor on my computer at 0.5Hz. Holding it between my fingers, placing in water, and placing in different types of dirt all gave different readings from zero (open air) to 1023 (in a glass of water). This makes sense with the sensor using the full voltage range of ground to Vcc. The ADC of the Dash is 10-bit by default so it ought to read from 0-1023.

For my garden, damp soil read 200-250, and very dry soil read 30-60. This would have to be calibrated for the specific soil types in your garden, which is easy enough to do: what does it read after watering or raining, and what does it read when you would want to water it?

Moisture sensor operating in the garden

Here is the finished product installed in my garden in all its glory. I can leave it here for several days at a time before it needs a charge. No reason a larger battery couldn’t be used in this project, and slowing down the reporting frequency will further increase battery life. A great expansion of this project would be to add solar power! You could also add email/text alerts in the Losant cloud at certain sensor thresholds. Next time I would also build in a USB charging cable to make battery charging easier.

Some test sample data from my kitchen as plotted in the Losant cloud service. Not yet battery-optimized and deployed. (To save power, can lower reporting frequency and also clock speed of the Dash)
Conclusion

This system will be super useful next season, or even on some indoor potted plants over the winter. Ultimately I ended up with a nice weatherproof device that should last a long time outdoors, and I even made two cloud services talk to each other, opening a world of possibilities for future projects.

This project can be adapted for pretty much any remote sensing application. What are you building? How would you improve the system?

You can read more about me and my projects on my blog, including additional photos of this project.

(This project was made as part of Hologram's Hacker-In-Residence program. For more information, contact Sheena, Hologram's content coordinator, at sheena@hologram.io) 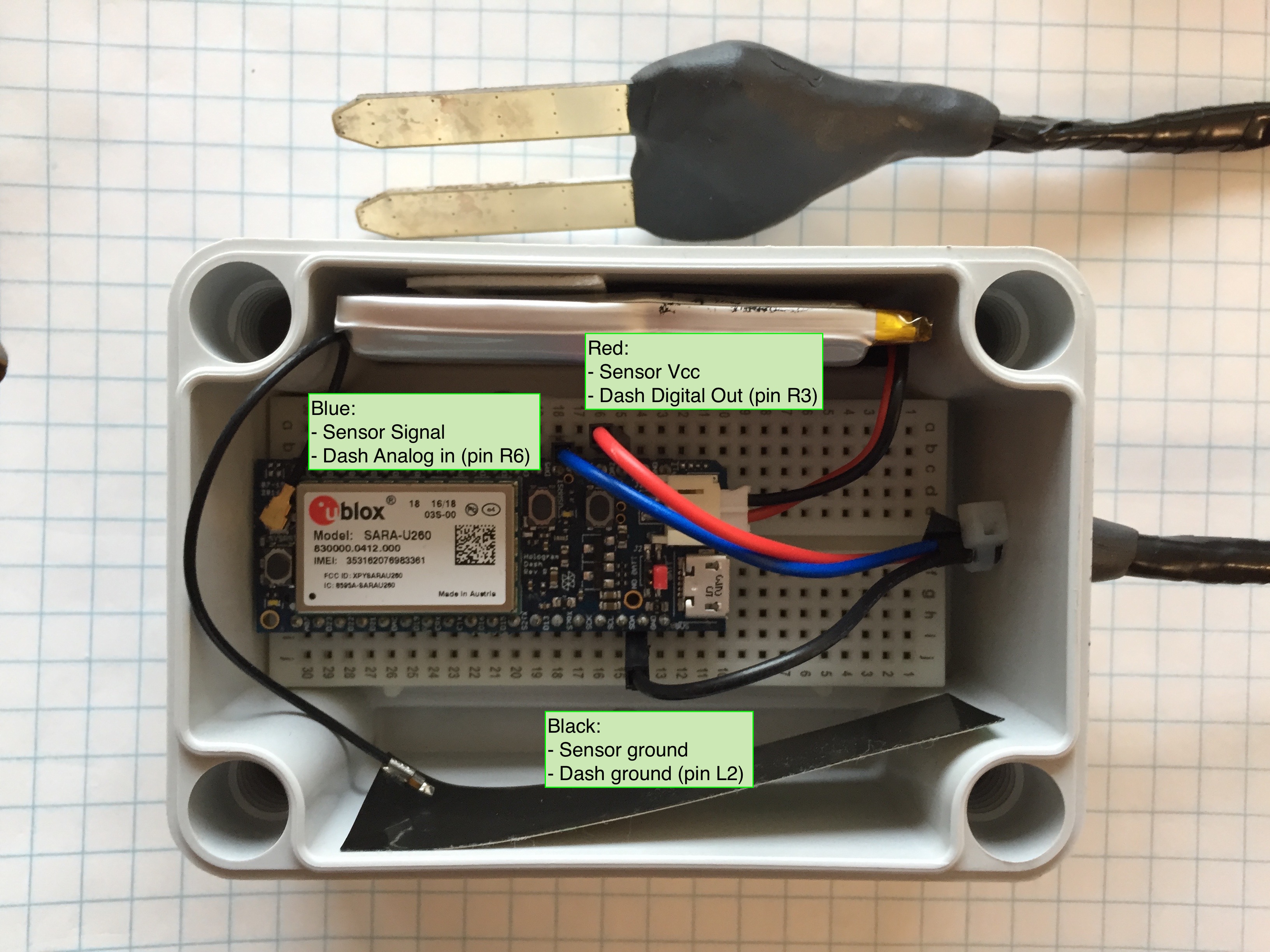 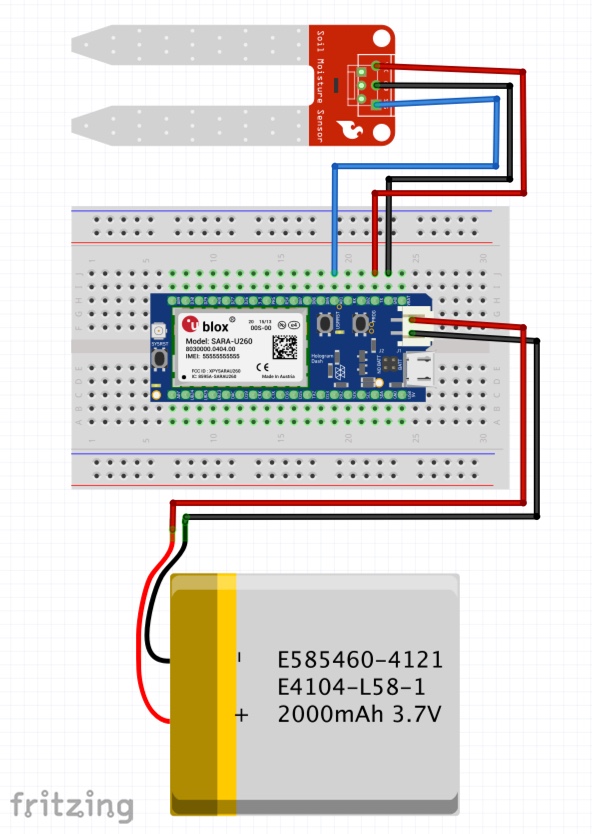 2 projects • 61 followers
In addition to being a maker, I am a professional product development engineer, problem solver, and project leader.
ContactContact